What are Mrs Pageants?

Mrs pageants are pageants that were created specifically for married women to enter after becoming married and/or aged out of miss pageants. They are appealing to all types of women, including those who gained experience as teen or miss contestants, and many who are new to pageantry and heard about it from other married women involved in pageants.

Many married women find that competing in pageants and being a pageant titleholder is a great way to promote their platforms. In fact, some of the most meaningful and successful pageant platforms belong to Mrs pageant contestants because of their life experiences. When talking with Mrs pageant titleholders, you will discover many of them have been working on what is now their platform for many months, or years prior to ever competing. Typically a Mrs platform is based on one's life goals, business endeavors, or personal mission. 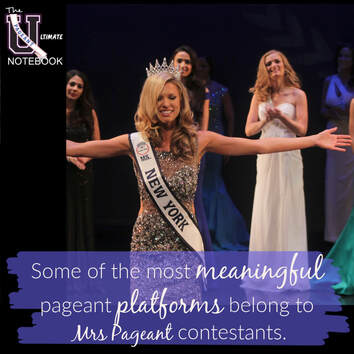 Appeal of Pageants for Married Women

Not only to pageants provide a venue for Mrs contestants to promote their platforms, they also provide personal enjoyment and a sense of camaraderie that only pageants can provide. For professionals, this type of event provides networking opportunities, a place to utilize business and marketing skills, and an opportunity to meet like-minded women with the possibility of developing new friendships.

Years ago, Mother-Daughter beauty pageants became popular for mothers with previous pageant experience to join in the fun with their daughters who were competing. However, over time the Mrs pageant circuit grew to stand on its own and produce multiple pageant systems designed with Mrs and Ms (previously married, divorced, widowed, or single) contestants in mind. As more married women became interested in pageants, the prize packages and the contests themselves grew in size and notoriety. Today there are many local, regional, state, national, and international pageant systems for married women who wish to compete.

Each pageant system will have its own sets of rules, but these are some guidelines that generally apply when it comes to Mrs. pageants.

There are quite a few well known of pageant systems and multi-level contests that have become established as the most prestigious in the Mrs and Ms pageant categories. The most popular International level Mrs pageants are:
In addition, the United States hosts several national Mrs. pageant competitions. Some of them are preliminaries to the international contests, while others have state preliminaries or stand on their own as at-large national pageants.

Some of the most popular U.S. national Mrs. pageants are:
When it comes to Mrs. pageants there are not as many contests open to contestants who are older, married, or who have been previously married, as compared to other pageant levels. However, the ones that do exist are known for a special bond of sisterhood that many married women enjoy. For those who competed in miss pageants during their youth, it can be an opportunity to revisit their love of pageantry and possibly reconnect with familiar faces from years ago.

For others who have never competed in a pageant before, or who may have been late bloomers in life, it's a chance to approach something new and exciting with the experience and wisdom that comes with adulthood. Mrs. pageant contestants are a very special and intelligent breed, and every contestant preparing for these types of pageants should approach the task with the same drive and enthusiasm as they would any business endeavor. 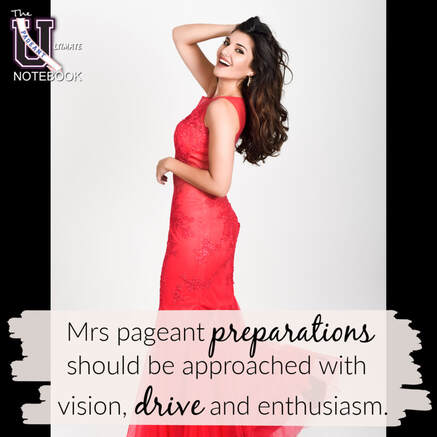 Married pageant contestants can draw from experience and wisdom

Preparing for a Mrs Pageant

With many of the married contestants in the pageant circuit having had a lifetime of previous experience, Mrs. pageants can sometimes become pretty competitive. So if you are planning to enter one, you should do all you can to prepare and be ready to do your best when you arrive. Elements of a Mrs. pageant generally include swim or fitness wear, evening gown, and interview. There may be more judged events that are required or optional, depending on the pageant system you have entered.

The best way to start is to understand all the competition categories for your pageant and prepare as best you can for each of them. Working with a pageant consultant or coach can help you identify areas where improvement might be needed.

If your time with a pageant coach is limited, or if you are new to pageants and looking for help with DIY pageant preparation you may benefit from our tools, books, or some of our free resources, to help you prepare for what to expect at a beauty pageant.

Introducing the Mrs Pageants Edition of the Ultimate Pageant Notebook

Our printable pageant workbook details what to expect at Mrs pageants, and explains an important aspect of pageants for married women - the pageant interview. Included in this e-book are a platform generator, to help you choose and compose a unique and individual platform or mission statement, and a pageant speech generator, to help you compose an introductory speech for introducing yourself to the judges, to sponsors, or at titleholder events. When it comes to pageants for married contesants, the interview competition can make or break your standings. Both your platform and your speech will become integral pieces to the total package you develop as your brand, and to outline your goals as a contestant and titleholder.

Our E-book is a download packed with 100 pages of helpful tips and tricks that will help you with pageant preparation for married women. You will learn about:
Previously, our specialty pageant preparation workbooks have retailed for $29 and up for the printed books, but through a new partnership with established instructional platform Teachers Pay Teachers we can now offer our products in printable E-book format at a fraction of the cost. Follow the link to preview our e-books and be sure to download more of our FREE pageants and modeling resources at our Teachers Pay Teachers store.